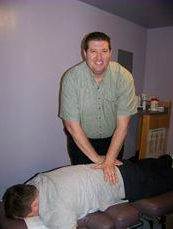 I grew up on a small farm near Great Bend, KS. I graduated from Great Bend High School in 1994, Barton County Community College in 1996, and Cleveland Chiropractic College in 2001.

How I knew I wanted to be a Chiropractor. The Gym where I went to Junior High at was a very old building with the basketball court in the basement and the walls were very close to the end of the court. In the 8th grade I was at basketball practice and on a fast break I went for a layup and the guy behind me pushed me into the wall behind the basketball goal. I hit the wall and immediately my side hurt. This happened on a Monday night. I was young and invincible so I figured the pain would go away in a day or two. By Thursday (game day) I still couldn't move and had to miss my first game.

My dad kept telling me all week to go see his Chiropractor and I would get better but, I was a teenager who knew everything and I knew that Chiropractic stuff didn't work and I would be fine in a couple of days. After missing my first game, I reluctantly went to my dad's chiropractor.

The Chiropractor did an exam on me and said I had bruised ribs ad several of the vertebraes in my back were misaligned. He adjusted me and for the first time in a week I could breathe normally and actually bend over and pick up a basketball. I was able to play in the next game and after a few treatments I was pain free and everything was back to normal. I reluctantly had to admit my dad was right (very hard for a teenager to do) chiropractic did work.

Two weeks after my injury was healed another player had the same injury happen to him. His parents didn't think chiropractic would work and took him to the medical doctor. He missed over two weeks of games and practices and still was not any better. Finally, he went to my Chiropractor and within a week he too, was pain free and back at practice.

I was amazed at how well Chiropractic worked. All through high school, I contined to be treated by the Chiropractor. During my Junior and Senior year he allowed me to come in his office several different times and job shadow him so I could see what he does and if it was something I would like to do. By the end of my Senior year of High School I knew what I wanted to do. I chose the most direct route to get to Chiropractic College.

Dr. Lauri and I started dating during our last year at Cleveland Chiropractic College. We waited until one month after Dr. Lauri graduated to get married here in Fort Madison (her hometown) at the First Christian Church (Disciples of Christ). A little less then a year later we had our daughter Dalyn. 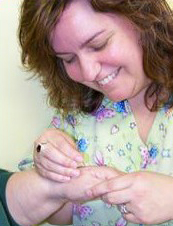 How became involved in my career: Ever since I can remember I’ve always wanted to help people. As a small child, I wanted to be nurse. After learning I would have to handle blood, I decided that might not be the career for me, since the sight of blood makes me almost pass out. After graduating high school, I had decided that juvenile probation was the way for me to go. Thankfully, Kathy Skewes offered to let me shadow her after my class day at SCC. Kathy’s philosophy was firm, fair and consistent. Even when a very young child was caught stealing meat from a grocery store, a punishment had to be given. That was the demise of me being a juvenile probation officer. I could not bear to punish a child who I thought might be hungry and stealing to feed himself. Even though I chose not to take the route of juvenile probation, Kathy’s philosophy of firm, fair and consistent has stuck with me to this day, I try my best to follow it as well. We moved to Kansas City and I started to work at a store that sold sunglasses. I knew this was not what I wanted to do all my life, but I was searching. Before too long I was managing three of the stores. One night while moving one of the stores, I hurt my back. My mom told me she was seeing this great chiropractor and that I should go to see her, she just so happened to be hiring a CA (chiropractic assistant). I went to her, she made my back pain go away, and I started to work for her. The tools I learned from her were invaluable. While working for her I started to work acupuncture seminars for Dr. Richard Yennie. The more I learned about chiropractic and acupuncture the more I loved it. The prospect of helping people not only feel better, but to maintain their health, was what I wanted to do with my life. This is not only my profession; it is my life’s work.

Most memorable moment: Giving birth to our daughter!

Do all the good you can,

By all the means you can,

In all the ways you can,

In all the places you can,

At all the times you can,

To all the people you can,

As ever long as you can.

We look forward to hearing from you.